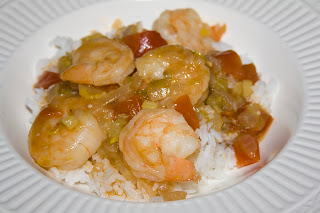 I love creole and Cajun food. One of my favorites is Shrimp Étouffée (or crawfish if I could get my hands on some).  Borrowed from the French verb étouffer meaning to smother, the shrimp in Shrimp Étouffée is smothered in a wonderfully fragrant and spicy sauce. I find it addictive and I have a hard time getting myself to stop eating this delectable dish.  The roux can be rather temperamental and if left unattended can burn. Preventing this tragedy isn’t as difficult as you would think. Get everything prepare beforehand and have it ready to be added once the roux reaches the desired color because you do NOT want to leave the roux once you’ve started it. After you’ve added the vegetables, seasoning, and stock, it no longer needs your undivided attention. Don’t forget to include rice and a nice crusty loaf of French bread.
⅓ cup olive oil
⅓ cup all-purpose flour
1 small green bell pepper, finely chopped
1 medium onion, chopped
2 cloves of garlic, minced (or 2 tsp of pre-minced)
2 stalks of celery, diced
2 fresh tomatoes, seeded and chopped
¼-⅓ teaspoons cayenne pepper (to taste/optional)
½ tbsp creole seasoning (to taste)
1 cup fish (or shrimp) stock
1 pound of medium shrimp- peeled and deveined
1 tsp of Louisiana hot sauce
·      Chop the green pepper, onion, garlic, celery, and tomatoes. Set aside. 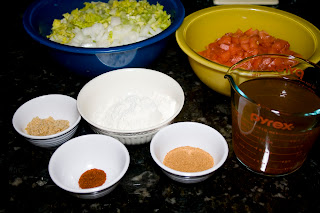 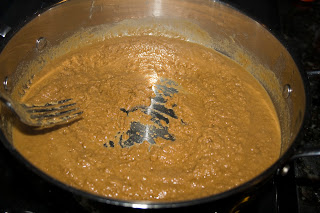 ·      Stir in flour, a little bit at a time. Stir constantly until the roux turns the color of peanut butter, maybe a little darker (approximately 15-20 minutes).*
·      Add the onions, green pepper, celery, and garlic. Saute until soft (approximately 5 minutes). 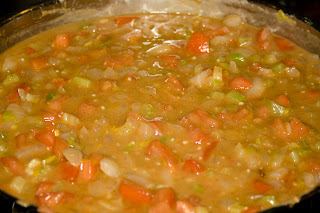 ·      Stir in the tomatoes, fish stock, creole seasoning, and cayenne pepper.
·      Reduce the heat to low and simmer for about 20 minutes.
·      Add the hot sauce and shrimp. Cook until the shrimp is done, about 10 minutes.
*If you burn the roux, dump it out and start over.
**I like to double the amount of sauce and put ½ in the freezer for a later date.