Skip to content
I mentioned in a couple of previous posts that I was starting to venture out into selling my baked goodies. A couple of months ago, I was in Savory Spice Shop. As I was paying for my purchase, I was telling the woman ringing up about being allergic to dairy and that the black onyx cocoa powder that I was buying was for an order of homemade Oreo cookies.  She got excited and suggested that I contact the owner of the shop about doing a tasting. They hold tastings on Saturdays through out the year. I pondered the idea a bit and then contacted Amy, she and her husband own and run the spice shop. She welcomed me to hold a tasting and I accepted. Of course after I said yes, I started to wonder what I had gotten myself into.
It was difficult deciding what items I was going to make. The original list was quite long. I really wanted people to get a good idea of how good dairy free can be. I settled on the dark chocolate cupcakes with dark chocolate frosting, vanilla cupcakes with vanilla frosting, almond sugar cookies, the chocolate truffle torte, and dairy free ranch dressing (they wanted something savory to reflect their name). I originally wanted to have some gluten free and vegan cupcakes in addition to the dairy free, but the gluten free vanilla cupcakes kept coming out wrong. I was soooo frustrated because I couldn’t figure out what I was doing wrong. Since I didn’t have a lot of time, I decided to keep things dairy free. I finally figured out what was wrong when I made my regular dairy free vanilla cupcakes. I had mistyped the amount of rice milk. Once corrected, the cupcakes turned out great, but it was too late to go back and remake the gluten free. I discovered that decorating small cookies is more difficult that decorating the larger ones and I found that my idea to use both my sugar cookie frosting and royal icing works. I normally don’t care for royal icing and my icing is part of what makes my cookies what they are. Unfortunately, my confectioner’s sugar icing doesn’t work well for outlining the cookie or for fine detail work. By combining both, I get the best of both. 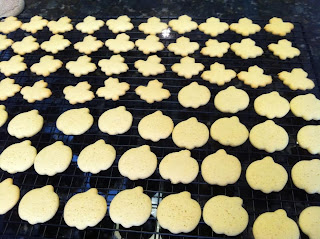 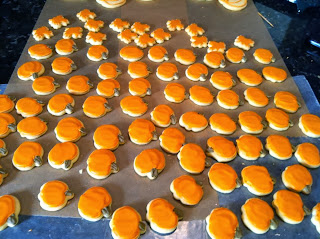 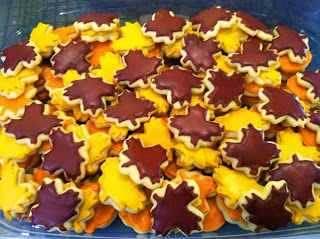 My next hurdle was figuring out how to transport close to 200 mini-cupcakes without messing up the frosting. The key was driving very slowly. I had a moment of panic when Mike forgot and took some curve at a faster speed than I would have liked. Thank goodness only 2 cupcakes tipped over.

Amy, Scott, and their staff made us feel at home at Savory Spice Shop. The actual tasting went very well. We had slow moments, but we also had moments where our table was crowded. Several of friends stopped by and it was nice seeing a couple of familiar faces. If you live in the Charlotte area or are passing through, stop by Savory Spice Shop. They have all kinds of spices, spice blends, and extracts. Everyone one is so friendly and helpful; so don’t hesitate to ask if you have questions.

They were kind enough to invite me back to do another tasting on their 2nd anniversary, the 30th of November. I have accepted and look forward to it. I hope that those of you who are nearby can stop in and try my treats.